Yasuyuki Kato, Yu Yamagishi, Hitomi Saeki, Tomomi Igarashi, and Shinya Takeuchi, the film research department of the private Ryogaryo Gakuen, will hold a two-day, one-night training camp during the summer vacation.
Members who start watching a movie in the audiovisual room in the school on the first day of the training camp.
On the way, noise runs on the screen, mysterious voices of men and women flow, and the images switch.
The fellowship of men and women projected on the screen … A woman with a plump body is wearing gym clothes for some reason. And the woman was her adviser, Lisa Shindo.
A new road that covers her face with both hands and escapes from the audiovisual room. Silence continues for a while. “It’s a lie …” Kato murmured. Among the absent-minded members, Takeuchi’s eyes glow red and sharply ….

A certain building. An emergency breaking news is played on a large monitor.
A mysterious virus “UNKOWN level4” that suddenly appeared. It was that when infected, it was dominated by intense lust and attacked the opposite sex with desire ….
And in the middle of breaking news, an infected person suddenly breaks into the studio. Attacks the announcer trying to escape and inserts a sharp penis. A crying announcer. The screen was switched to a test broadcast.

The mysterious virus “UNKOWN level4” that spreads throughout the school and town.
Can the members of the Film Studies Department, whose behavior gradually becomes strange, get out of the school safely?
What is the fate of them …!? 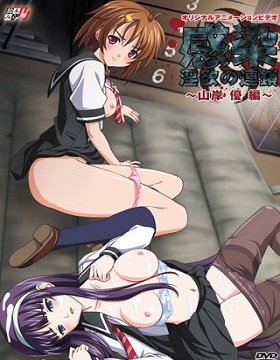