Time is the eve of the war.

The “Unified Empire”, which tries to stand at the top of the world with its outstanding scientific power,
gathers the best of scientific power and knowledge of Kabara, and
from those who draw the blood of “angels”, the crystal of God’s power “Angel Core” Succeeded in taking out.

It is said that the future of this “Angel Core” research will greatly influence the battlefield of the next war.

The top secret research institute of the Imperial Silver Crusaders in the frigid region “Nortranto” at the northern end of the unified empire territory.
The story of “Angel” and “Angel Core” begins here.
The mission assigned to the young empire officer “Lieutenant Ralph Maskenval” to “Nortranto” is to
supervise the girls “angels” called subjects.

However, the substance was to have sex with “angels” and
to nurture the “angel core” that is the crystal of their souls.
Ralph feels uncomfortable with his colleagues who embrace “angels” as a matter of course and drown in pleasure.
Then, in the wake of a certain incident, the “angels” are willing to open their bodies to the soldiers and find out the true reason.

At that time, Ralph makes a crucial decision.

It will spread ripples that affect the battlefield. What is that decision? 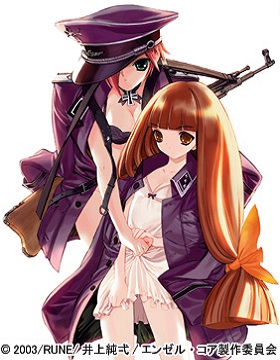